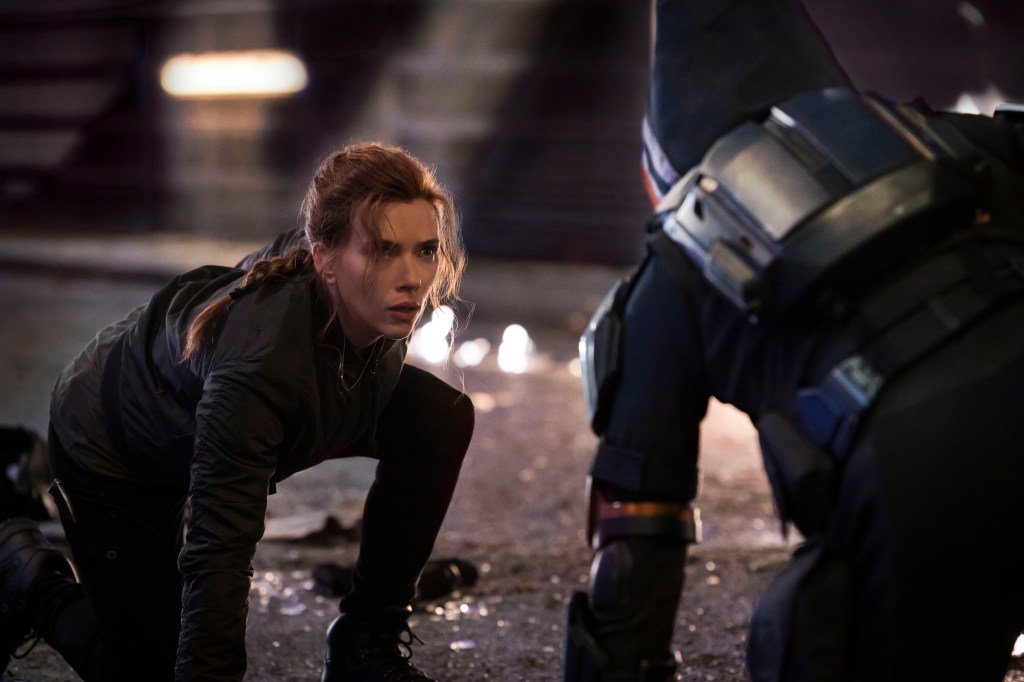 SATURDAY AM UPDATE: Disney/Marvel’s Black Widow is coming in at $39.5M for Friday, which is very close to what we first spotted yesterday. This puts the Scarlett Johansson movie at a projected 3-day start of $89M, still the best domestic opening we’ve seen during the pandemic.

Also, for the first time during the pandemic, all films at the weekend box office will exceed $100M, with an estimated $125M per box office sources. That’s the best weekend we’ve seen at the B.O. since Presidents Day weekend 2020, when Paramount’s Sonic The Hedgehog led all pics to $156.1M over three days. In addition, this weekend, weekend 28 on the B.O. calendar, is very close to what all movies grossed during their corresponding weekend in July 2019 ($126.9M). Essentially, it’s a big indicator that exhibition is back to some normalcy, even if 80% of 5,88K U.S. and Canadian theaters have reopened.

Black Widow‘s audience reactions are an A- CinemaScore –Marvel movies typically get a solid A — and the Screen Engine/Comscore PostTrak exits are 88% positive, with a 69% recommend for the general audience. Kids under 12 gave the pic an 86% positive, and a 66% recommend.

Don’t get me wrong: Those are very good audience exits, but for a Marvel movie, they aren’t platinum, when you consider that Black Widow is in a small class of A- graded MCU pics (Ant-man and the Wasp, Thor: Dark World and Captain America: First Avenger), with the first Thor receiving the lowest audience grade of B+.

Some sources are under the impression that Disney experimented with releasing Black Widow day-and-date on Disney+ Premier because the audience diagnostics weren’t as perfect as previous MCU films, coupled with the fact that the movie was on the lower side of critical acclaim, despite being 80% Certified Fresh on Rotten Tomatoes.

This might sound like splicing hairs, but for Disney, a slight change in audience and critical reception is like a shift in the San Andreas fault. There’s a reason why Pixar’s Luca went on Disney+: Disney can’t afford to have another Pixar movie opening in the $30M range again. That’s not the kind of business those movies are expected to do; they’re expected to dominate, and Luca, despite its 90% on RT, likely ran the risk of being another Good Dinosaur. As one major studio executive once told me about Disney: “They’re very good at making the best worst-case scenario decisions”.

Still, the Disney+ Premier of it all, more than Covid-19 hesitation, is what’s arguably preventing Black Widow from hitting $100M, the way an MCU movie should. Consider the fact that Disney began promoting this movie with a trailer drop at San Diego Comic-Con two years ago. Industry estimates expect a 30% slide today for Black Widow, the steep drop due to the fact that Friday’s number includes $13.2M Thursday previews. Back those previews out, and Saturday’s estimated $27.9M is actually +6% over Friday’s actual $26.3M.

In regards to Black Widow‘s marketing warpath, which was turned off and on during the pandemic as the film was delayed, the pic originally had that trailer we saw at SDCC also drop during Super Bowl 2020. Disney officially relaunched the Black Widow campaign for its July weekend debut here on April 3 with a trailer and a poster, incorporating the Disney+ facet.

The first trailer had 70M global views in 24 hours, surpassing pre-pandemic trailer views. On May 3, the campaign further highlighted Black Widow with a very emotional content piece called “Marvel Studios Celebrates The Movies,” highlighting the expansive scope of Marvel Studios upcoming in-theater content, such as Shang-Chi, Eternals, and beyond; plus a shot of the audience going nuts on opening night of Avengers: Endgame back in April 2019.

I understand Disney was slightly underspending heading into the week by as much as 25%-35% on TV spots, but then ratcheted it up on Thursday with a big blast. iSpot estimates that before Friday, Disney spent $19.3M on Black Widow TV spots, which yielded a billion ad impressions. Compare this to the $23.2M which Universal spent to beat the drum on TV for F9 per iSpot.

Black Widow also received some additional media value from co-branded spots with GEICO ($4M) and Ziploc ($293K), plus a Disney+ spot with a media value of $79K, so far. Black Widow‘s promotional campaign included more than 30 brands across the globe with custom TV & digital creative from BMW and Synchrony Bank as well. Additionally, the BMW campaign included a BTS Featurette, exhibitions in Germany and Los Angeles, and a podcast with Black Widow Action Director Darrin Prescott.

Other custom digital partnerships/takeovers for the MCU title were across Fandango (on which the pic has posted the best presales of 2021 to date), YouTube, Roku, TikTok, Amazon, and a Twitter E3 Gaming Sponsorship, plus Twitter Emoji debuts. There were also exhibitor partner circuit program announcements and art debuts (including posters for Dolby, RealD and ScreenX, collectible Imax/Regal ticket, and an Imax/AMC comic book online.

As far as social media analytics corp RelishMix sizing up Black Widow, they weighed in the pic’s social media universe before opening at 496.2M across Facebook, Twitter, YouTube and Instagram, which “is above normal for the superhero genre, with dedicated Black Widow pages building to 925K fans, adding 23K per day, most heavily on Instagram. YouTube views for the 25 owned domestic trailers next to the 53 owned videos on Facebook and outpacing FB views by 4X with a combined 266M views.”

Johansson and fellow Black Widow castmember Rachel Weisz aren’t activated on social, however Florence Pugh is super loud on her Instagram with 2.6M fans with the social star of the film being Stranger Things’ David Harbour with 7.1M fans, plus Shania West with 610K, Handmaid Tale’s O-T Fagbenle with 170K fans and Violet McGraw with 84K on IG.

Assesses RelishMix, “Convo around MCU super fans observes plans for opening weekend, in theaters and little social reference to the Disney+ option. Chatter compares this weekend to other recent openings including Godzilla vs. Kong and F9 — and speculating where the post-Covid-19 box office totals will land, as fans clearly know it’s ‘go-time’.  Skeptics are back, too, which is a return to normal, with call-outs about breadcrumbs, casting, VFX, the upcoming virtual Comic-Con, who is the Taskmaster, if The Winter Soldier is behind-the-mask, and will Hydra make a return. Plus, in threads around the film — fans have tears of joy over the unconfirmed reports in Vanity Fair and Page Six that Scarlett Johansson and Colin Jost are expecting a baby.”

Elsewhere this weekend, Paramount’s A Quiet Place Part II is crossing $150M off a pure theatrical window in weekend 7. To date, it’s the highest-grossing movie of the pandemic, and likely has another $10M+ or more left in its run. The pic is posting a fantastic weekend hold of -24%. Universal’s F9 will hit $140.9M by Sunday, and Black Widow will feasibly cross $100M in sometime during the coming week. All very good benchmarks for the return of cinema.

FRIDAY MIDDAY UPDATE: Industry estimates –not Disney– are seeing Marvel’s Black Widow at a first day in the $40M+ range, with a shot of exceeding $90M. Conservative projections are in the mid-$80Ms over Friday-Sunday. Today’s number includes last night’s previews of $13.2M. We always footnote these Friday midday numbers as a lot can change between now and tonight. Also, there’s the Disney+ Premier factor. How much is that eating into grosses?

There’s also Tropical Storm Elsa which is dumping water and flooding streets in New York and Connecticut. While we often say rain drives people to the cinema, this is the type of rain you don’t even get in the car for; in that regard a Disney+ Premier at $29.99 of the Scarlet Johansson movie is a revenue backstop for Disney to a certain degree. Remember, the studio gets to keep all that Disney+ Premier cash, and doesn’t split with exhibition. Again, it’s how the whole Disney+ of it all cannibalizes ancillaries down the road, and several rival studio executives and financiers tell me, only Disney knows the truth.

There is a belief that Disney+ is eating into grosses: This is an MCU movie, technically the first from Disney, after 2019’s record-breaking Avengers: Endgame (not counting Sony/MCU’s Spider-Man: Far From Home). You mean to tell me people are slow to come out for this long-awaited pic after it’s been delayed over a year from its original release date of May 1, 2020? Captain Marvel, the last standalone MCU superhero movie posted a first day of $61.7M (including previews) and $153.4M pre-pandemic. Black Widow also bridges over to the upcoming MCU Disney+ series Hawkeye.

With a Rotten Tomatoes score of 81% Certified Fresh, industry estimates have Black Widow between an $80M-$90M 3-day start.

Black Widow opened in a further 30 material markets, including Germany, Russia, Australia, Japan, Korea, Brazil and Mexico, taking its full total to 41 material markets to date, with the first two days racking up an estimated $22.4M to date. Nancy will have a further overseas update.

Black Widow‘s Thursday night stateside is ahead of such Marvel movies as 2018’s Ant-Man and the Wasp ($11.5M),  2014’s Guardians of the Galaxy ($11.2M) as well as Warner Bros/DC’s Wonder Woman in 2017 ($11M).  Ant-Man and the Wasp‘s Thursday night represented 34% of its $33.7M opening day which yielded a $75.8M opening while Guardians of the Galaxy’s Thursday repped a third of its $37.8M Friday for a $94.3M opening. Wonder Woman wound up getting a lift over its opening weekend from its female fanbase who were hungering for the DC superhero’s big screen debut. We’ll see if there’s a similar turnout by females over the weekend for Black Widow. Wonder Woman‘s Thursday made up 29% of its $38.2M Friday, for a $103.2M opening weekend.

Among MCU previews, Avengers: Endgame owns the all-time record for all movies at $60M off showtimes which began at 6PM. That turned into a record opening day in April 2019 of $157.4M, and best ever Hollywood pic domestic debut of $357.1M.

The Scarlett Johansson standalone Marvel Cinematic Universe title also became available on Disney Premier at midnight for $29.99. Any box office success brings questions this weekend: How much more could Black Widow make? And how does this kill its ancillaries or slow its legs down the road? Also, with the whole Disney+ Premier element, it’s a moving target to determine how frontloaded Black Widow is; clearly the die-hards showed up last night. Rather than go see the movie a second time in the theater, do the fans go home and simply buy it on Disney+? Or did a quadrant of MCU fans stay home instead and buy Black Widow? The last standalone MCU movie was Captain Marvel in March 2019 and she posted a Thursday night of $20.7M. Hmmm.