Don’t Breathe 2: Can The Blind Man Be The Hero?

Don’t Breathe 2: Can The Blind Man Be The Hero? 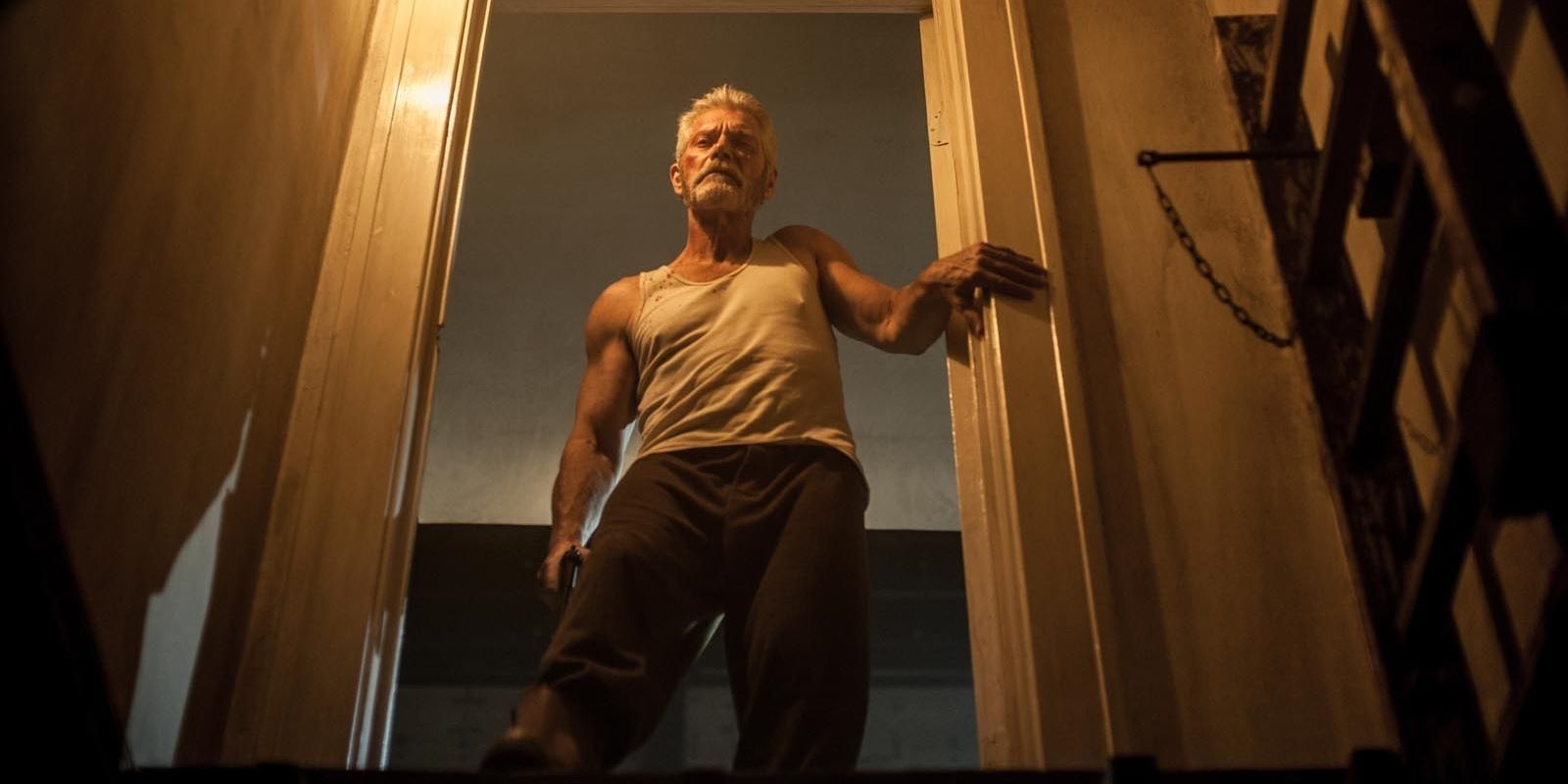 The first trailer for the long-awaited Don’t Breathe 2 recently premiered, showing off more of the first film’s visceral action and grim tone. Shockingly, the sequel seems to center around The Blind Man, the first film’s villain as the protagonist.

Don’t Breathe 2 is co-written by the original film’s director, Fede Alvarez, and stars Stephen Lang, reprising his role as The Blind Man. The sequel was teased by the filmmakers almost immediately after the first film’s release and has been eagerly awaited by horror fans, who praised the first film’s simplicity and inventiveness.

Don’t Breathe was released in 2016 and was a massive success, a modestly budgeted horror film that did fantastic at the box office and was hailed by fans and critics alike. The film centered around a trio of young criminals, driven to home burglary to escape poverty. The trio comes upon the home of a blind army veteran who is rumored to hold a massive vault of cash and mark it as an easy target. After breaking in, they discover that the blind man is armed and extremely dangerous, leading to a tense cat and mouse chase throughout the blind man’s home.

The film is unquestionably a brutal horror film, the three protagonists are career criminals who have sunk to the level of robbing a blind man, leading the audience’s sympathy in the direction of the blind man. There is almost a level of catharsis to be found when the tables are turned and the blind man starts attacking the robbers, cutting the power to give himself a powerful advantage. That feeling does not last, however, as the robbers discover a dark secret below the house which turns the film on its head.

The protagonists discover a basement in which the blind man has chained a young girl, holding her indefinitely for the crime of accidently killing his daughter in a car accident. He goes on to explain that he has artificially inseminated the girl, against her will, to force her to birth a new child to replace the one she took. This stomach-turning revelation crescendos into the captured girl’s death, whereupon the blind man attempts to capture the film’s central protagonist, Jane Levy’s Rocky, for the same purpose. Rocky escapes, flees the state and the film ends with both the hero and villain alive, a rarity in horror films.

The audience experiences a span of emotions towards the blind man, who goes unnamed in the first film, but has now been identified as Norman Nordstrom. Early on, he is depicted as a quiet shut-in, his blindness and advanced age granting him some natural sympathy. The character is deeply threatening, stunningly capable and willing when it comes to violence and morally reprehensible when his secret is revealed.

In the world of horror movie villains, Nordstrom was instantly fascinating. Lang, previously best known for Avatar, gives a performance that imbued a brutal character with a kind of deranged wisdom. He explains his actions with strict sincerity, he claims that a man can do anything when he realizes that there is no god, his dialogue is sparse but laden with grim meaning. As a villain, Stephen Lang reaches the high echelon of the genre, but could his performance be translated to the protagonist role?

The trailer for the sequel was released on June 30th and at time of writing it has almost 10 million views and the hype is palpable. The trailer reintroduces fans to Nordstrom, living once again in quiet solace as the caretaker of a young girl, Madelyn Grace as Phoenix. Nordstrom seems to be training Phoenix in survival, but in short order his home is attacked and the girl is kidnapped.

One of the armed kidnappers, who seem to be decked out like special forces rather than like common criminals, tries to announce to the girl who Nordstrom really is, prompting a violent outburst. The trailer shows off a series of the first film’s hallmark action scenes wherein Nordstrom finds a way to obscure vision in the arena to ensure his advantage as he hunts and kills the monsters who kidnapped young Phoenix. The footage shown lightly suggests the tone may shift from horror towards action.

Based on this trailer, the second film seems to have recast one of the most visceral threats in modern horror, as something like the hero of the Taken films. The trailer makes mention of who Nordstrom “really is,” making it clear that his identity is not known to the young girl in his care. Most of his backstory is mysterious throughout the first film, it is established that he is an army vet who lost his daughter, but little else is known. The fact that Nordstrom had kidnapped and violated a young girl was the big reveal of the first film, the moment the full scope of the threat became clear and the true darkness of the character was laid bare. Can the filmmakers really hope to make this character a grim anti-hero when his actions were so horrid?

Alvarez has claimed that the true protagonist of the film will be Phoenix and that they have no intention of rehabilitating Nordstrom. While it is certainly true that a work’s protagonist need not necessarily be its hero, placing a character previously best known for horrific crimes against a young woman in the role of dark guardian is questionable. A dark, complicated or even evil man using a propensity towards violence to defend an innocent young girl is a fairly common trope in media.

Giving a character a young child to take care of is often one of the easiest way to paint them as the good side of the conflict, but doing so with a character like Nordstrom suggests a level of forgiveness or even sympathy that may not connect with audiences. This film may require of its fans that they sympathize with Nordstrom’s horrific actions, to listen to his deranged justifications as if they are legitimate, which could just be a bridge too far.

On the other hand, awful people can often be placed in a positive role and protagonists can certainly be centered in a story without being relatable or even likable. Though on a much lower scale, the protagonists of the first film were complicated and morally ambiguous people. So long as the framing is appropriate, fans could enjoy a film about an evil man doing the right thing, there are plenty of narratives from Breaking Bad to Rick and Morty wherein fans enjoy terrible people doing the wrong thing. Lang’s performance still seems as fantastic as ever, fans will likely get to enjoy the character in a variety of new situations.

Shifting a character as engaging as The Blind Man from the role of show-stopping horror villain to dark protagonist is a tricky proposition. Whether the filmmakers are simply angling the narrative toward the most engaging character, creating a challenging tale about a villain coincidently doing a good deed or even struggling to reform the monster, fans will look forward to Don’t Breathe 2, opening in theaters August 23rd.

MORE: The Horror Film So Realistic That Its Director Was Arrested For Murder