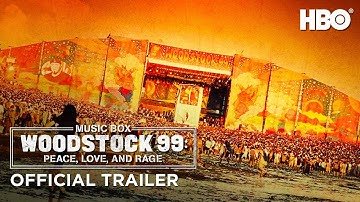 Instead of a celebration of peace, love and music, the roughly 220,000 people who descended on Rome (amid nearly 400,000 total concert goers according to reports at the time) and the fledgling Griffiss Business and Technology Park for Woodstock 99 got oppressive heat, $4 water bottles and a fiery, violent finale, according to a new HBO documentary.

“Woodstock 99: Peace, Love, and Rage” is the first in a new HBO Max series called “Music Box.” It is set to premiere on Friday, July 23. Filmmakers released a roughly two-minute trailer of the documentary on YouTube on Thursday.

According to the trailer description, the documentary examines the conditions that led to the event’s incendiary end and “how the festival collapsed under the weight of its own misguided ambition.”

For the documentary, filmmakers interviewed artists who performed at the event which was held on
July 22-25, 1999 with two massive stages at opposite ends of the runway at the former Griffiss Air Force Base, which was realigned in 1995 and no longer housed the massive B-52 Stratofortresses or the KC-135 refueling stratotankers.

Prior to the concert, event promoters were determined to avoid the gate-crashing that had occurred at previous festivals, constructing a plywood and steel fence around the perimeter to keep out those without tickets with about 500 state troopers hired for additional security.

In addition to the two main stages, the event also included several alternate stages, a latenight rave tent and a film festival in one of the former base hangars.

The city of Rome, including the downtown and Black River Boulevard areas, became a draw for concertgoers, who filled bars, restaurants, stores and hotels.

The documentary, the trailer says, shows footage of the actual festival and depicts an atmosphere of “dark energy” created by intense performances and societal rage amid a backdrop of violent mosh pits, drug and alcohol use as well as people rolling in a combination of mud and feces around overturned and destroyed porta-potties.

The trailer can be found online at https://www.youtube.com/watch?v=h62RmIsx6MA&t=46s.